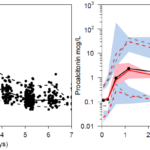 Background: Concentrations of endogenous procalcitonin (PCT) increase within hours of infection, and after events such as birth and surgery [1]. Determining the natural history of procalcitonin may help identify abnormal increases indicative of infection. However, in the dataset only the date of observations are recorded without the clock times [2]. If clock times are unavailable, it might be assumed that all measurements and events occur at the same time of day, but this may be unrealistic for procalcitonin as the time course of observations varies during the day. In that case it may be helpful to impute clock times, but this raises questions regarding the best approach.
Objective: Investigate how different scenarios for the random choice of observation times influences the model description.
Methods: Data: 1267 PCT plasma concentrations measured in 282 non-infected pre-term and term neonates following birth, where the clock time of observations is unknown (date only recorded) [2].
Models: A turnover model with first order elimination was used to describe procalcitonin production. A one compartment model with a bolus input and first order elimination was used to describe a birth effect on the production of PCT. The volume of distribution was fixed at 15L/70kg.
Imputation of clock times: Clock times were imputed by random samples from a uniform distribution from 00:00 to 23:59 on the day of birth. Clock times of PCT measurement were imputed similarly.
Imputation scenarios: When multiple measurements were recorded on the same day: Scenario 1: Measurements were entered in the dataset in the order they were provided. A minimum interval between measurements of 4, 8, 12 and 16 hours was also investigated. Scenario 2: Measurements were re-ordered based on the assumption concentrations increase on days 0-2 after birth and then decrease after this with a minimum of 4 hours between measurements. Scenario 3: First measurement of each day occurring at 9am and an interval of at least 8 hours between measurements, in line with common clinical practice at the study hospital [2].
Parameter estimation: Ten unique datasets were created for each scenario. Parameter estimation was performed for each dataset using NONMEM 7.5.0. The median and 90% interval of the objective function and parameter estimates were calculated for each scenario.
Results: PCT concentrations increase after a lag time during the first post-natal day and start to decrease by day 2. Assuming the measurements were listed in the data set in the order they were sampled (scenario 1) had a lower objective function than scenario 2. A 12 h time difference between measurements has a lower objective function than the other intervals investigated in scenario 1. In line with clinical practice scenario 3 had the lowest objective function.

Figure 1: VPC using scenario 3. Black is the observed data and red is the predicted data. Median is represented as a solid line, 5% and 95% values are shown as dashed lines. A 90% confidence interval is shown as blue and red bands around the predictions.
Conclusion: The PCT model has a lag time of up to one day that was revealed by imputing clock times. The clinical practice scenario had a peak at 1 day and the other scenarios predicted a peak at 2 days. The model is sensitive to the choice of observation time. PCT observations should be reported with clock times or in hours and minutes.
References
1.         Chiesa, C., et al., Reliability of procalcitonin concentrations for the diagnosis of sepsis in critically ill neonates. Clinical Infectious Diseases, 1998. 26(3): p. 664-672.
2.         Fukuzumi, N., et al., Age-specific percentile-based reference curve of serum procalcitonin concentrations in Japanese preterm infants. Scientific reports, 2016. 6(1): p. 1-6.

View all abstracts by A Bokor →