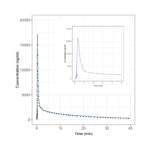 Introduction: Rocuronium is commonly used to temporarily paralyse the muscles of the jaw and voice box to facilitate intubation. In the first few minutes after rapid IV administration, cardiac output (CO) is a primary determinant of arterial blood concentrations, and thus effect, for many drugs.  In particular, CO can be significantly altered in emergency patients. Therefore, it is vital that we characterise the complex pharmacokinetic-pharmacodynamic relationships for rocuronium to better understand the impact of variability in CO in emergency patients using physiologically-based (PBPK) pharmacokinetic approach.

We have identified a model which clearly demonstrates that CO is critical in the pharmacokinetics and pharmacodynamics of rocumronuim [1]. Unfortunately, the approach taken only indirectly included CO in an empirical “forcing function”, such that the model was unique to the dataset used.  Furthermore, the liver was not described as a separate organ, the effect was linked to an empirical effect-compartment and not a tissue. As CO was indirectly included, only observed correlations of CO and PK-PD parameters were reported.

Aim: To refine the Kuipers et al (2001) model to include CO directly and compare the resultant predicted concentrations.

Methods: The model was constructed in the mrgsolv package in RStudio using a series of ODEs.  The empirical venous mixing of Kuipers prior was modified to a “tank in series” through which blood is delivered to the lungs via CO while the lungs were reduced to a single flow-limited compartment. The rest of the body comprised the same “fast” and “slow” equilibrating tissues as Kuipers, with the addition of the liver eliminating rocuronium. The data for rocuronium concentrations after a 0.5mg/kg bolus dose in a single subject in Fig. 4 of the paper were digitized using WebPlotDigitizer.

Conclusion: We have developed a preliminary semi-PKPB model for rocuronium which describes concentration-time profile well. However, further refinement will require additional experimental clinical data and the use of a population PBPk-PD approach.

View all abstracts by David Foster →