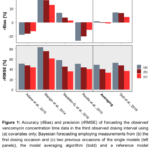 Background: Currently, the recommendation for therapeutic drug monitoring (TDM) of vancomycin is shifting towards AUC-guided dosing through model-based precision dosing (MIPD). However, selecting the correct model is crucial to give appropriate dose recommendations (Broeker et al. CMI, 2019). The aim of the present study was to derive and evaluate a model averaging algorithm (MAA), which automates the model selection process and thus eases the clinical application of MIPD.

Materials/methods: The MAA was developed by estimating individual pharmacokinetic parameters with a distinctive set of population pharmacokinetic models and weighting the forecasted concentration by the individual model fit. First, a simulation study was conducted using the single models developed in diverse populations (extremely obese, trauma and critically ill). Subsequently, the MAA was applied to 180 hospitalized and critically ill patients for which routine vancomycin TDM had been conducted. The predictive performance of the MAA using all models jointly was compared to the performance of the individual models on prospectively measured concentrations. Relative bias (rBias) and relative root mean square error (rRMSE) were used to determine accuracy and precision, respectively.

MAA applied to the heterogenous clinical dataset resulted in an inaccuracy of less than 1% (rBias) with a higher precision than the best single model. While the predictive performance of the single models (Fig.1 left panels) varied substantially, MAA using these models jointly resulted in unbiased and most precise predictions regarding both a priori prediction (Fig.1(a)) and Bayesian forecasting (Fig.1(b)-(c)). The MAA performed even better than the model of Goti et al. 2018 that was recently evaluated best in vancomycin Bayesian forecasting.

Conclusions: MAA overcomes one of the major difficulties to implementation of MIPD, which is patient-individual selection of the adequate population pharmacokinetic model. Especially if the underlying population of the individual remains unclear or the patient displays atypical pharmacokinetics, MAA can provide a more reliable Bayesian forecast. The MAA algorithm was implemented into the open-access MIPD software TDMx.

View all abstracts by uster →