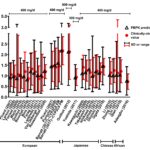 Methods A PBPK model of imatinib was built in the Simcyp Simulator (v.17) integrating in vitro metabolism and clinical pharmacokinetic data and accounting for ethnic differences in body size and expression of CYP enzymes and proteins involved in imatinib disposition. The impact of ethnicity on imatinib dosing regimen was evaluated based on the established Cmin,ss targets.

Results The PBPK model demonstrated excellent predictive performance in describing pharmacokinetics and the attained Cmin,ss in patients from different ethnic groups (Figure), shown by prediction differences that were within 1.25-fold of the clinically-reported values. PBPK simulation suggested a similar dose of imatinib (400 – 600 mg/d) to achieve the desirable range of Cmin,ss (1 – 3.2 µg/mL) in populations of European, Japanese and Chinese ancestry. Meanwhile, patients of African ancestry may benefit from a higher initial dose (600 – 800 mg/d) to achieve imatinib target concentrations, due to a higher CL/F of imatinib compared to other ethnic groups.

Conclusion PBPK simulations highlighted a potential ethnic difference in the recommended initial dose of imatinib between populations of European and African ancestry, but not of Chinese and Japanese ancestry.

View all abstracts by Jeffry Adiwidjaja →