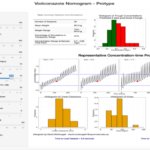 Aims Voriconazole is a broad spectrum triazole antifungal used as first line therapy for invasive infections. Pharmacokinetic (PK) studies have indicated large between subject variability between dose and exposure, which has prompted the use of therapeutic drug monitoring (TDM) to optimise dosing [1].  Voriconazole also exhibits large within subject variability, potentially limiting the utility of maximum a posteriori dose estimators. Currently, no suitable tools, guidelines, or nomograms exist to assist clinicians interpret individual voriconazole concentrations. The objective of this research was to assess the predictive performance of a previously developed interactive application[2] that allows clinicians to explore a range of likely future exposures following TDM.

Methods The application (developed using Shiny and RxODE packages in R) was constructed using a simulation approach. 100 stochastic simulations (each consisting of 2000 subjects from the NHANES database) were conducted using a previously published population PK model[3] under 60 different dose scenarios.  The user interface allows the clinician to input patient and sample specific data. The application uses the inputted information to search the database of simulations to identify up to 1000 “matched” subjects (and associated PK parameters). The application then predicts the likely exposure for the matched patients under alternative doses. A screenshot of the application is displayed in Figure 1.  Previously published voriconazole TDM data was used to assess the predictive performance of the application.[4] The first observed plasma concentration, dosing history, and patient demographics were used to predict the distribution of expected concentrations at the second sampling time point.  The proportion of subjects within the expected distribution was assessed.

Conclusion The application is a novel idea to assist clinicians to explore how alternate doses might impact exposure. The predictive performance indicates the application performs reasonably well given the limitation on retrospectively collected TDM data.  Subjects with concentrations outside the expected distribution were almost exclusively associated with IV therapy.  This is likely due to a between occasion variability on oral bioavailability included in the simulations, allowing for increased variability in the expected distribution of concentrations for oral therapy.   Additionally, the application allows for the interpretation of concentration collected at any time within the dosing interval rather than being restricted to trough concentration.

2.   McDougall DA, Green B. Development of an interactive application to assist clinicians in the dose adjustment of voriconazole. Abstract 212 WCOP 2016. Brisbane.

View all abstracts by David McDougall →