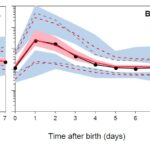 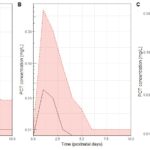 Background: Procalcitonin (PCT) may be used to monitor infection and guide antibiotic therapy (1). However its usefulness in neonates is hampered due to changes following birth and events such as surgery.

Methods: PCT concentrations measured in 282 non-infected pre-term and term neonates (22 and 41 weeks gestation) were provided for analysis (2). A turnover model was used to describe PCT production and first-order elimination. Variability in clearance was predicted using theory based allometry with mass predicted from birth weight. The influence of birth and maturation on model parameters was explored. Simulation was used to propose reference ranges for PCT following birth. Covariate distributions for 1000 term, preterm and very preterm subjects (each) were sampled with replacement from a database of 5031 subjects (3). Median and 90% prediction intervals were generated.

Conclusions: We provide a physiokinetic model for PCT concentration in non-infected term and preterm neonates. Between subject variability was large despite accounting for maturity, body size and the impact of birth. The 90th prediction interval for peak concentrations in very preterm neonates is nearly twice that of term neonates and suggests a large portion of uninfected neonates would give PCT concentrations above commonly set diagnostic thresholds (e.g. 2-2.5 mcg/L for sepsis) if measured 24 h after birth. Visual Predictive Check for PCT concentrations for 0-7 post-natal days. A: very preterm (delivered before 33 weeks), B: preterm (delivered at 33 weeks to before 38 weeks) and C: term non-infected neonates. Percentiles (10%, 50%, and 90%) for observations=black dashed lines, predictions=pink dashed lines, with 95% confidence intervals for prediction percentiles (median, pink shading; 5th and 95th blue shading).

Acknowledgement: We are grateful to Professor Fukuzumi for providing the PCT data.

View all abstracts by Jacqueline Hannam →